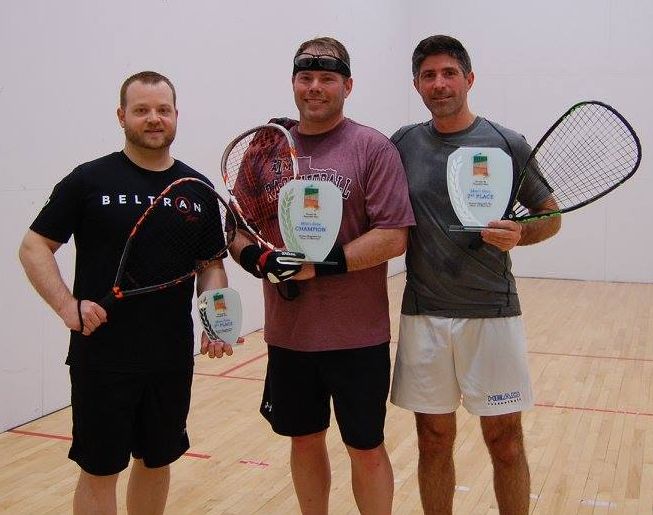 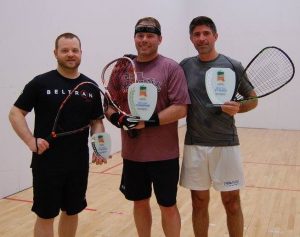 The Vicenza Racquetball Club and Racquetball Italia hosted the Vicenza Winter Shootout at the fitness center on Caserma Ederle, this past weekend. The U.S Army Garrison Italy Sports, Fitness and Aquatics staff supported the sport event which is one of the few Italian tournaments on the European Racquetball Tour.

Players from Italy, Germany, Bolivia (living in Italy), and the United States competed in three men’s and one women’s bracket for trophies and, more importantly, bragging rights until the next tournament, according to J.D. Lattuca, organizer for the event.

“We had a great turnout with 25 players,” said Lattuca. “Not only did we have the top players from Northern Italy, but some of our players traveled from as far away as Naples, Rome, and Bad Tölz, Germany to play.”

“We couldn’t have done this without the support of Ricky Jackson and the rest of the Fitness Center crew,” Lattuca added. “They went above and beyond to ensure this tournament was a success.”

Doug Miller of the 414th Contracting Support Brigade in Vicenza claimed the top prize this weekend, defeating Carlo Papini of Rome in two games to win the Men’s Open title (15-8, 15-11). Papini did not go home empty handed though; he defeated Vicenza’s Robert Johnson in two highly competitive games to win the Men’s B bracket (15-14, 15-11).

“Robert (Johnson), J.D. and I play here all the time so we get used to how each other plays,” said Doug Miller. “These tournaments force us to up our level of play and focus on beating top level players from other clubs.”

Piero “Bam Bam” Landa, President of Racquetball Italia, called this weekend’s event one of the best on the European Racquetball Tour. “What a great weekend of play! Racquetball is already a great cardio workout; tournament racquetball is intense! You better be in shape if you’re going to play in a tournament like this.”

On the women’s side, Bolivian Adela Cordova came back from a first game loss to defeat her good friend and fellow Bolivian, Mabel Vela, in the tie breaker (9-15, 15-7, 11-7).

Racquetball Italia and the Vicenza Racquetball Club will host its next tournament, the Italian Nationals (Campionato Nazionale Italiano), April 23-24 at the Caserma Ederle Fitness Center.