Successful Germany-Netherlands meeting in The Hague

Successful Germany-Netherlands meeting in The Hague 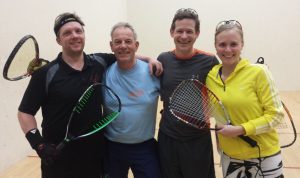 Players from Germany and The Netherlands have met in The Hague on March 7th for a friendly meeting at the Westvliet Wellness & Racquet Club to play some good racquetball, lots of fun and to meet old friends. A previous planned event had to be cancelled because of some illness amongst German players. “It was about time to visit our Dutch friends again to support their great efforts for the sport in the Netherlands and to also just see some good old friends again”, Jorg Ludwig (President German Racquetball) said. Erik Timmermans, President of the “Nederlandse Racquetball Associatie” added: “This was a great gesture by Germany and we appreciate it very much, especially since a first visit had to be cancelled and it was obvious difficult to find a second date for a meeting.” By the way, Germany won that meeting with 8:4 matches, but that was not really important when a great day in The Hague ended with a nice dinner.