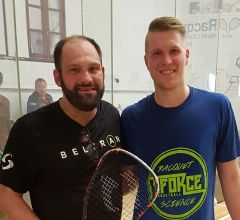 Arne Schmitz is the winner of the 2015 Hamburg Open, the season opener of the European Racquetball Tour 2015-2016. He defeated his country mate Mike Mesecke 15-8, 15-14 who himself defeated last years’ winner Oliver Bertels in a close Tie-Break match before. It is Schmitz’ first success at the Hamburg Open but his second win at an Open tournament in Hamburg after winning the German Open earlier this year. Together with Oliver Bertels, Schmitz also won the dounbles division against the German/Austrian team of Andre Dietrich and Jan Lysakowski in straight two games.

All results and draws: https://www.r2sports.com/tourney/home.asp?TID=16501.